RESEARCH
Georgian Bay Formation  Research
A spike in contruction and excavation in the Toronto area has led to large quantities of bedrock being trucked away and dumped making a good base for parking lots roads etc. This short window of opportunity makes for a great fossil playground for students and a study field for researchers. Already one new species of marine animal has been discovered by a local collector and named after him by the R.O.M. (Royal Ontario Museum). Take a look at some of the evidence found against evolution and for Creation and Catastrophism. 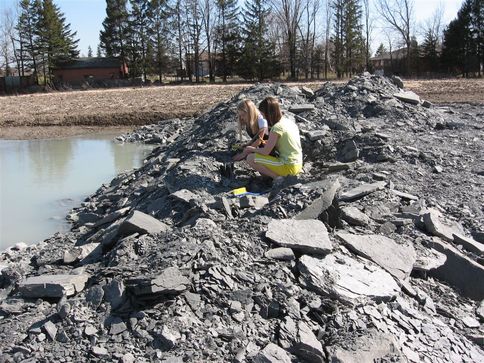 Parking lot in the process of being built north of Toronto. 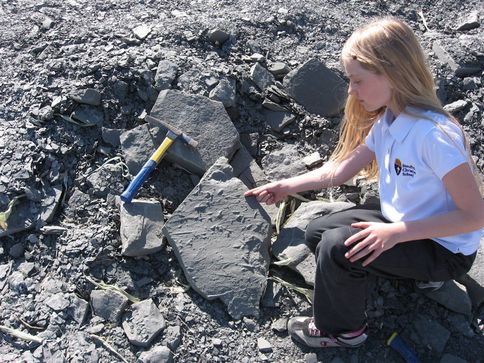 Current Events!
These interesting structures are called tool marks or bump skip and drag marks. Debris is dragged along by fast moving water marking the sediment underneath. Eventually new sediment covers the marks and creates a cast of the marks.The flow of water can be seen in the larger slabs. This is great evidence for a catastrophe and not for the slow and gradual processes of uniformitarian geology. 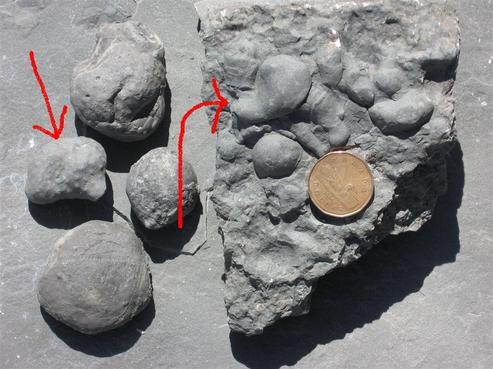 Royal Flush.
Bryozoans are marine creatures that live in colonies similar to coral and grow in several different shapes. These globular shaped bryozoans were not found in nice neat colonies but broken off, scattered and fossilized in place. Many were found broken in
loose shale. This is what you would expect to see as a result of a watery catastrophe such as the Great
Flood in Noah's day. 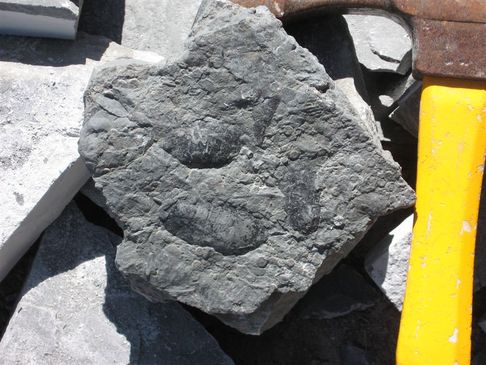 All Clammed Up!
Mussels (Pelecypods) were in abundance in the Georgian Bay Formation shale and were found closed up. When you touch a modern living clam they close up due to fright. When they die they open up. This means the fossil mussels were buried alive and deep that they couldn't burrow out and the surrounding sediments hardened too quickly for it to open up after it died. 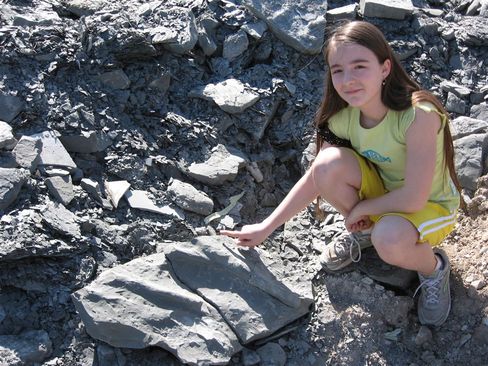 Sedimental Value!
Fossilized gutter casts or water channels are formed when fast flowing water over sediment cuts a channel which is later filled in with more sediment producing a half circle structure when split. They can be straight or snake like in appearance. Many were covered in tool marks indicating fast flowing water. They must have been buried quickly and hardened quickly to be so well preserved.

King Sized Beds!
The sedimentary rock pictured below ( rock that was laid down by water)
is located along the creeks of West Toronto. This rock is part of a formation
called the Georgian Bay Formation and appears at or near the surface
of the ground all along the Niagara Escarpment, on parts of Manitoulin Island
and around the Ottawa area. If that wasn't big enough this formation is part of
a Delta having its start at the Appalachian Mountains in the U.S.A.
Something big has definitely gone on here! 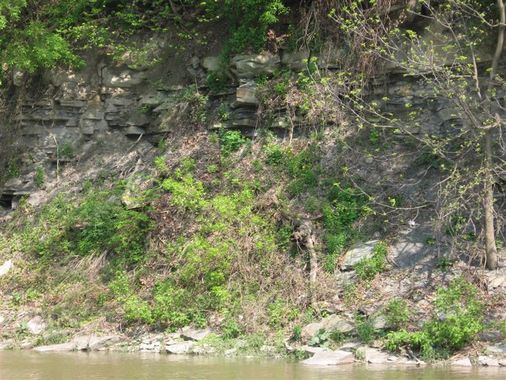 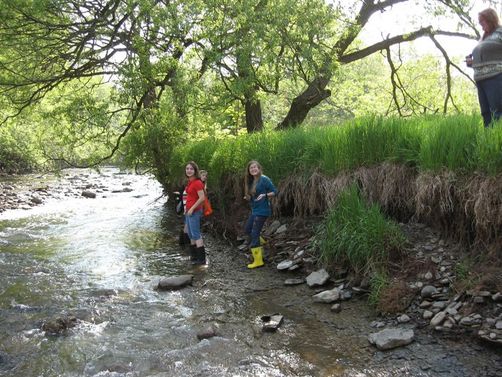 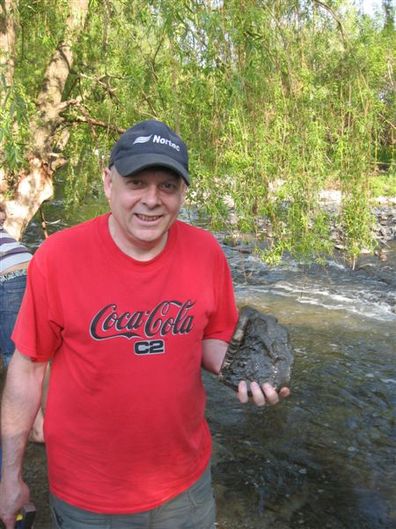 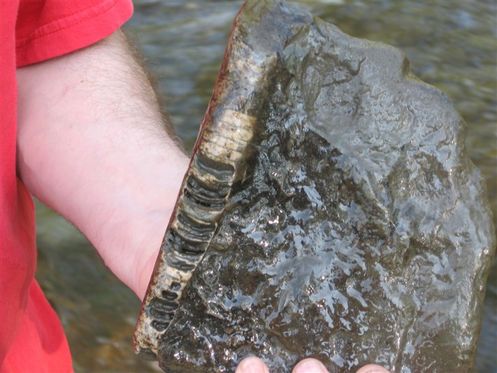 A beautiful straight coned nautiloid or cephalopod showing internal chambers.
These creatures are extinct which is no help to the theory of evolution. 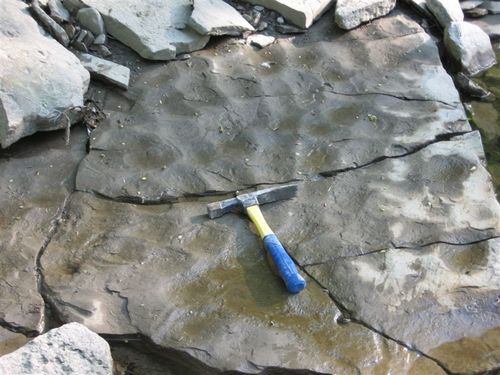 Limestone slab with ripple marks. Evidence this place was under water before.
Continued 2013 Georgian Bay Formation Research
Monday April 22nd was a fitting day for field research in the Georgian Bay Formation in Meaford Ontario where Ian Juby and Martin Legemaate continue their trace fossil study. A trace fossil is just that, a trace left by a creature but not the creature itself. The weather was great and the vegetation at this time of year was minimal which made for easy access to the creek bed where the rock formation is exposed. 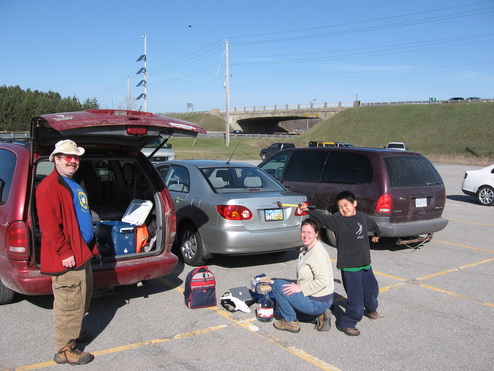 Ian, Becky and Zimran getting ready for the trip up to Meaford Ont. 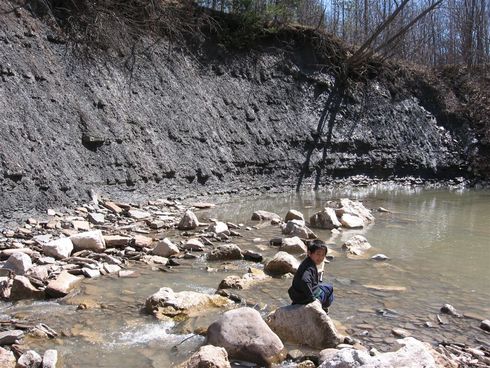 Zimran down in the ravine at Workmans Creek 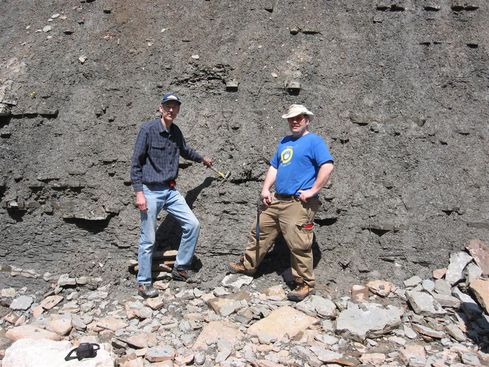 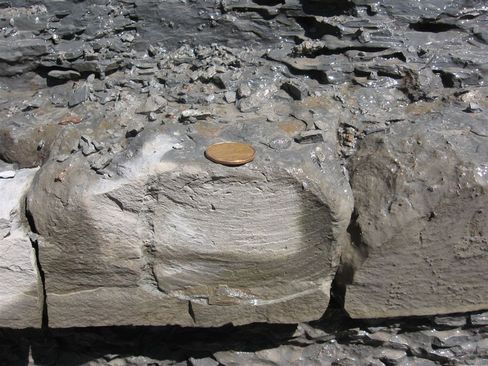 Large vertical invertebrate burrow. Note dollar coin for size.
(An invertebrate is an animal without a back bone) 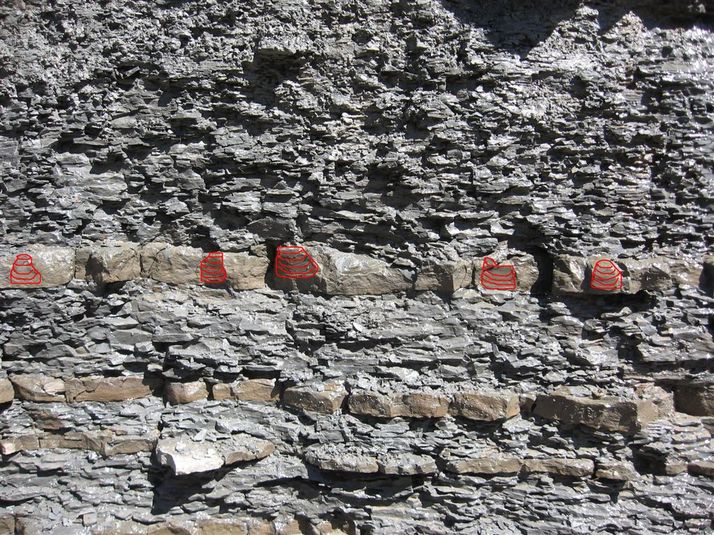 Almost immediately we spotted these markings in a limestone bed. These curious markings are invertebrate burrows probably created by worms. The presence of these vertical burrows tells us this sediment had quickly and deeply hardened before the burrow could be destroyed by water currents. Since the worm is soft bodied and rarely is left as a fossil the burrow was the only thing remaining. Fossils plants and animals receive Latin names but even burrows and other markings are given names. The name of this particular burrow is (Diplocraterion cf. biclavatum).
(Burrows outlined in red) 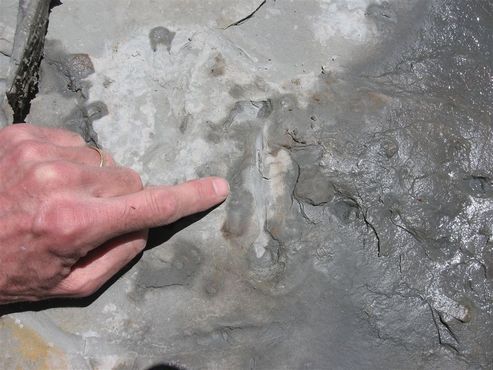 Another mystery solved for us was the presence of dumbbell type markings on the tops and bottoms of slabs. 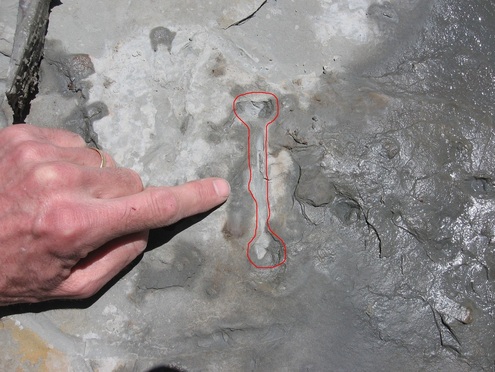 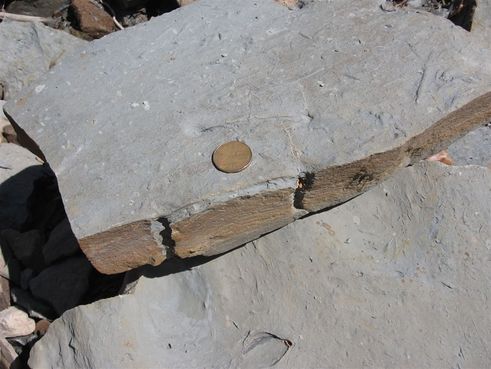 It turns out that the dumbbell marking is a top view of the invertebrate burrow. This slab is proof
showing top view (epirelief), side view (endorelief) and bottom view (hyporelief) of the
same burrow. Note the other one just behind the coin. 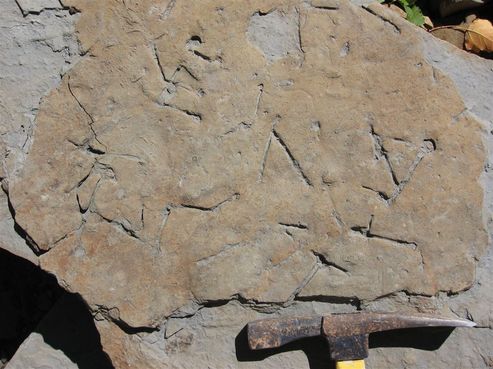 A slab with multiple dumbbell markings looking much like native carvings. 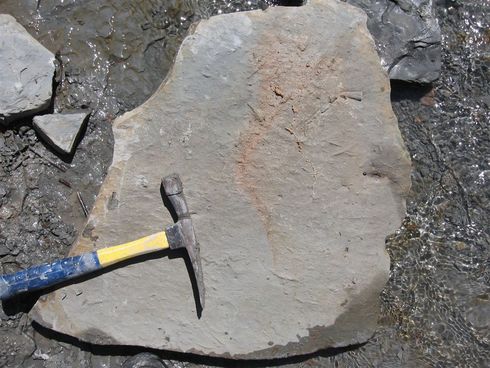 More evidence of a turbulent environment were the presence of tool marks on the bottom
of the slabs where debris scraped along the mud leaving these marks now preserved in
stone with some even showing a flow direction.

Modern studies* say the deposits (rocks) were attributed to the catastrophic events associated with unusually large storms, tropical storms and hurricanes. The Georgian Bay Formation is another example (of many) showing evidence of a violent past that fits nicely with the biblical account of Noah's (one year long) flood followed by continuing catastrophism that still effects planet earth. Every time we have an earthquake, you are looking at one long term result of the breakup of the land that began at Noah's flood. Every time you see or feel a savage storm it should remind you of weather that first began on a global scale in the days of Noah.

Enjoy this Stouffville Christian School field trip to a vacant lot where Georgian Bay Formation rock
was dumped in preparation for a parking lot.The students learned how to recognize creation,
catastrophe and even intelligent design in the rocks and fossils they found.
Other Research
Pillow Talk! 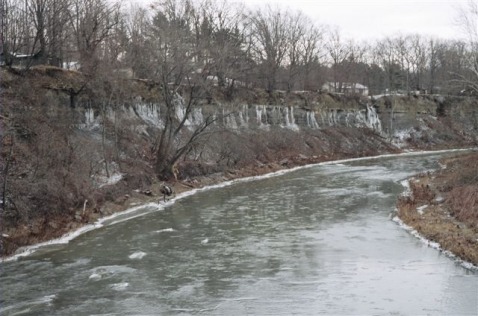 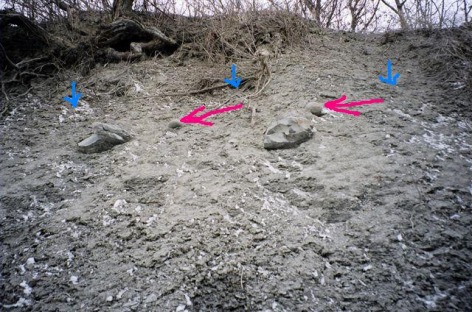 Ball and Pillow Structures.
Ball an Pillow Structures, Evidence of Rapid Deposition.
The rock face in this photo is made up of sedimentary beds of limestone and shale. The protruding rocks in it are called "Ball and Pillow Structures". The limestone deposited on top of the shale or mudstone was compressed by overlaying sediments  injecting the limestone into the shale below producing the form of balls and pillows. This would have to happen while all top, middle and bottom sediments are still soft over a short period of time.
The laying down of millimeters of sediments over millions of years would not have produced these curious structures! 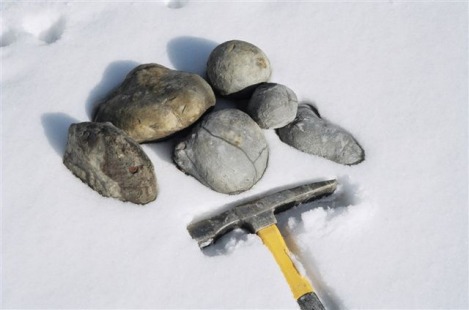 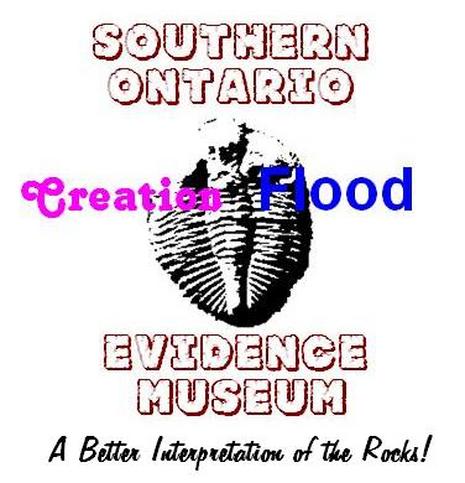