ABOUT US
TIME LINE
2004
The rocks from Ontario alone are enough to discredit the theory of evolution and after years of
Creation Ministry in Ontario and Canada John Mackay's and Martin Legemaate's Ontario fossil
collection was starting to build up in basements, sheds and Church storage rooms. It was apparent
that the time was now to get the collection out to the public. 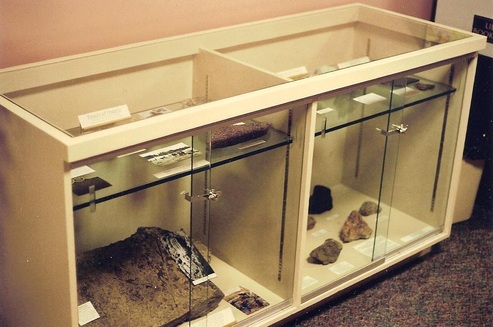 This mobile museum was first established by Creation Research in March 2004 with its first
showcase in Ajax Ont. at Westney Heights Baptist Church. Creation Research supporter
Ken Bloomfield who is now with the LORD is given special honor for donating
this very first cabinet. It still stands with the others in the museum. 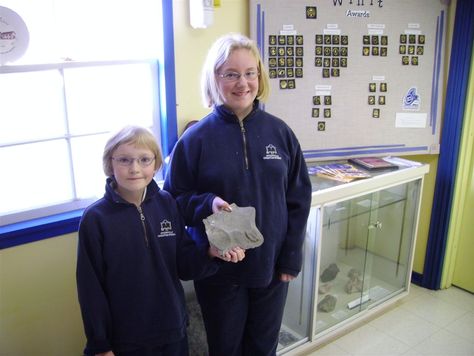 Kerstin and Rebecca Jerry in front of a display at Stouffville Christian School.
-
-
2007
Display moved to  Eastridge Evangelical Missionary Church in Stouffville Ont.. 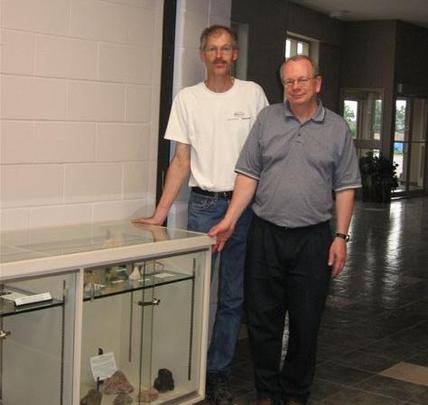 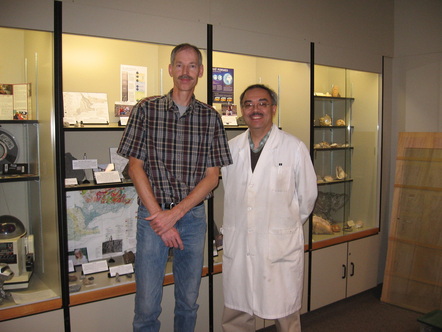 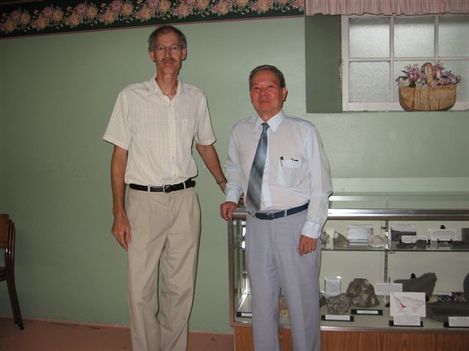 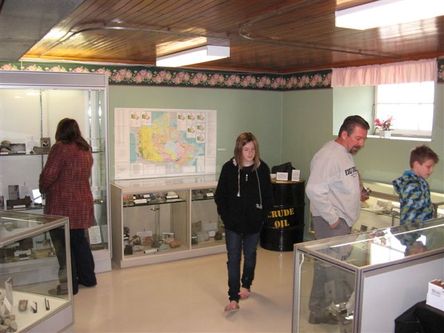 -
-
2011
A third exhibit was added to the two existing ones at Redeemer University College. 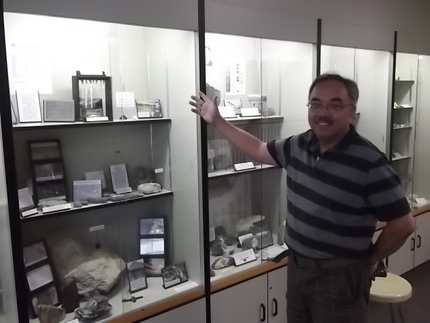 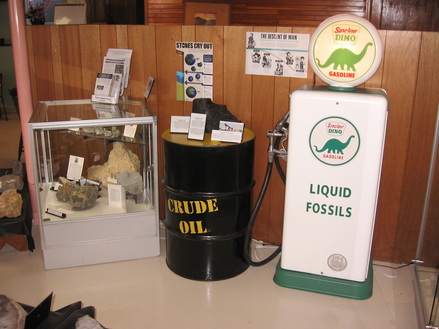 -
-
FALL OF 2013
4 more travelling display cases out and about at various locations. 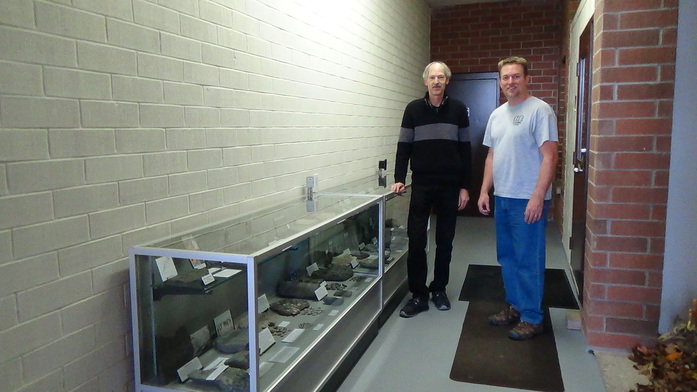 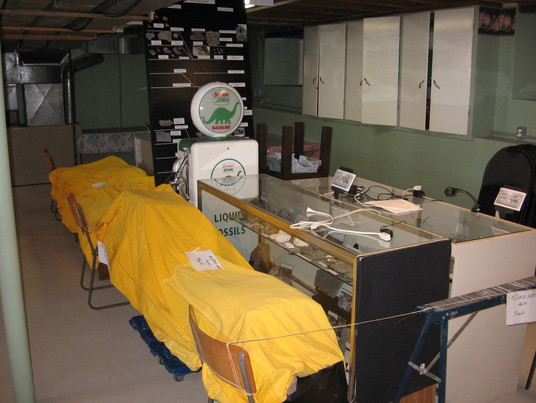 The museum is mothballed to make way for some major church renovations.
-
-
March 2017 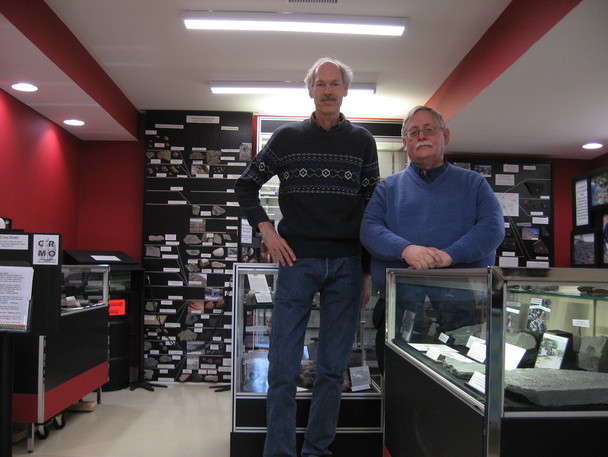 The bible overwhelmingly suggests that the earth is young; therefore there
must be evidence for this. Since the bible is true there also must be
physical evidence for Creation and Catastrophe/Noah’s Flood.
This museum strives to provide that evidence through a collection of
rocks and fossils from Ontario and beyond countering evolution’s claim
of “millions and millions of years” showing that the bible can be trusted
from cover to cover. This museum’s primary purpose is to encourage
Christians and to provide a balance in this evolutionary saturated world. 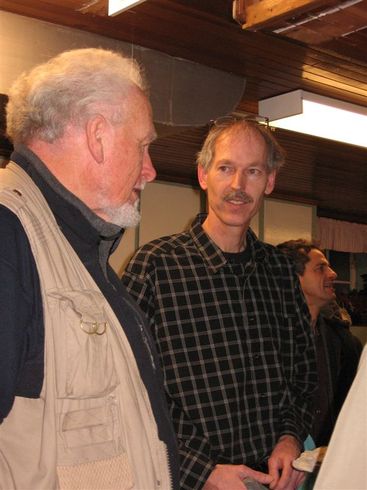 BIOGRAPHY
JOHN (LEFT IN PHOTO)
John is International Director of Creation Research and has been lecturing on Gods wonderful creation as well as leading field trips world wide and doing field research around the globe on Creation and Noah's Flood for the last 30 years.
For a more detailed biography click button.
JOHN'S BIO

Martin Legemaate grew up in the Christian Reformed Church but had tried to "blend evolution and God together," before hearing a talk by Australian Creation Researcher John Mackay. "He really challenged me to look at the evidence for myself," Legemaate says. "My jaw dropped." “The evidence for Biblical Creation and Noah’s Flood is real!”

Now Martin is active in the ministry of "Creation Research" and assists in Ontario research and field trips. Realizing that real fossil samples help make a convincing argument in the creation evolution debate, Martin has joined several geological societies and scours quarries and mines to collect specimens for display. Martin and John's Ontario rock and fossil collection was set up as a small museum showing evidence the Bible's account is real and evolution is false.

Ever wondered?..........
How did oil shale form?
Are trilobites really primitive as the evolutionary geological column demands?
How far do some of these rock beds go?
Did the rocks of Ontario take millions of years to be laid down?

Here Martin takes you through the rocks of Ontario starting at the Precambrian
All the way up to the Devonian showing that no matter where you look in the rocks,
each layer shows ample evidence for creation, catastrophe and intelligent design.
Be amazed at some of the geological oddities in Ontario

Ever wondered?..........
What ever happened to the dinosaurs?
How long do badlands take to form?
What are the implications of finding dinosaur soft tissue?

Ever wondered?..........
What is a polystrate tree and why is it evidence for a quick burial?
Many organisms were bigger in the past. Why does this fit the biblical picture?
What is coal? Why are fossil thorns devastating to the theory of evolution?

Filling in for 5 days in Nova Scotia for one sick John Mackay enabled Martin to do 2 days
of shore line fossil collecting guided by local fossil expert Stuart MacLeod around
the rocks of old Sydney town where they have been extracting coal since 1720.
Not only do these fossils show evidence of a catastrophic past
but also that things were much bigger.

Ever wondered?..........
Did dragons really exist? What is a fast fossil?
Is there evidence that dinosaurs evolved into birds?
What is a belemnite and ammonite and why are they
evidence for creation and against evolution.

A visit to the Cretaceous and Jurassic rocks of Switzerland and Germany
ending up in the famous town of Solnhofen  where the famous fossil
Archaeopteryx was found.

Ever wondered?..........
Is there real on site evidence that creatures evolved?
Were organisms buried where they lived? What is a living fossil?
Is extinction evidence for evolution?

Find out as Martin takes you through an amazing 3 day dig in dinosaur country, Glendive Montana.
A tour through Glendive Dinosaur and Fossil (Creation) Museum.
Be amazed at hidden evidence for Creation and Catastrophe in the secular museums of Glendive.

Ever wondered?..........
Did God use evolution?
Where did  the millions of years come from?
Who was Charles Lyell? What is the gap theory?
Is Radiometric dating techniques accurate?
Is progressive creationism a viable theory?