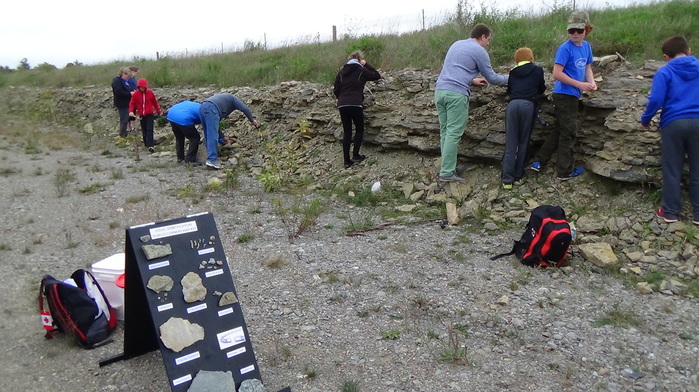 Powles Corners site
There was so much interest in this year’s fossil trip that we had to schedule two more additional
Saturdays for the overflow of interested people. The first homeschooling fossil trip on the 24th of
September went well ​with beautiful Autumn weather and over 30 people in attendance.
September 24th Fossil Trip
After an opening introduction at Pioneer Baptist Church in Norland Ontario we headed to the first site, a working limestone quarry but of course not working on Saturdays! After a safety lesson everyone headed over to the rocks with fossil identification sheet in hand to see what they could find.
Trilobites bits were found almost immediately because I tipped them off that they were primarily located in blue rock. Crinoids stems were also found which is fairly rare in this Gull River Formation of rocks.
People learned today that there were two types of fossil creatures, extinct ones as in the trilobite and living fossils as in the crinoid. Both are no help to the theory of evolution. A) Crinoids are still alive today and as Genesis 1 says they, “Produced after their own kind”. B) Trilobites are extinct. If evolution were true we should be gaining species not loosing them.
Folks were also fascinated when striking black rock. It gave off an oily smell. The existence of black oil shale indicates a quick and deep burial of plant and animal matter. If evolution’s slow burial were true, we would have no oil in the world and no fossils for that matter. Everything would have rotted away!

SITE 2
After a lunch break back at Pioneer Baptist, then we were on to site two, a long low road cut exposing the fossiliferous Verulam Formation. The group certainly was not disappointed here! Being somewhat trained now to spot fossils they were collecting them by the bag full. New this year was an on site fossil identification board with real fossils found at these sites. Again trilobites were found and very large crinoid stems.
October 1st Fossil Trip
​The October 1st fossil trip went well too with over 25 students and adults from Lindsay Christian School. The weather had rain foretasted but the Lord had a dry day planned.  Some more great finds including a complete but partially obscured in the matrix Bathyurus trilobite. Also an excellent cephalopod found at site 2.
Site 2 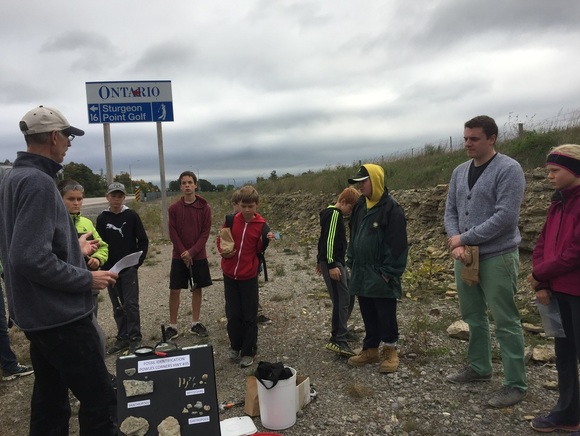 In the conclusion at the end of the day people learned of the size of these rock beds (Simcoe Super Group)
they were digging in that they stretch across much of North America.
These beds and the rock layers worldwide fit nicely with the Noah’s flood account in the bible.

Sadly only 8 went through the door of the Ark and were saved. The group was reminded today (with a few amens)
that now Jesus claims he is the door and if anyone enters by Him, they will be saved. (John 10:9a). The
consequences of not going through either door was and will be catastrophic!
​
I must have been very thorough in my presentation because at the final Q and A time no one had a question!
Fossil Trip Supplementary
After a rain it pays off to return to a fossil site where a flurry of digging took place leaving clay coated slabs laying around. Here is a nice slab of crinoid stems found after the rain has washed it clean. By the way, I kept this crinoid stem (Archaeocrinus) to be removable. Pretty cool!
A small video sample of fossil trip activites