ADVANCED FOSSIL IDENTIFICATION
Some of you know the basic Ontario marine fossils but want to know more of what can be found in Ontario or you may have a hard to identify fossil that doesn't seem to match any standard species. That's where the advanced fossil id page comes in. We hope to compile rare and weird fossils, trace fossils (animal activity) and pseudo fossils (not an organism or a trace fossil but merely a result of sedimentation). Stay tuned as we build on this new web page!
Cyclocrinites 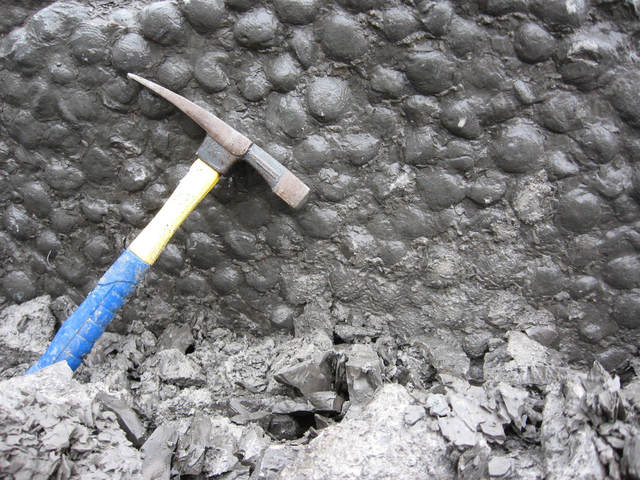 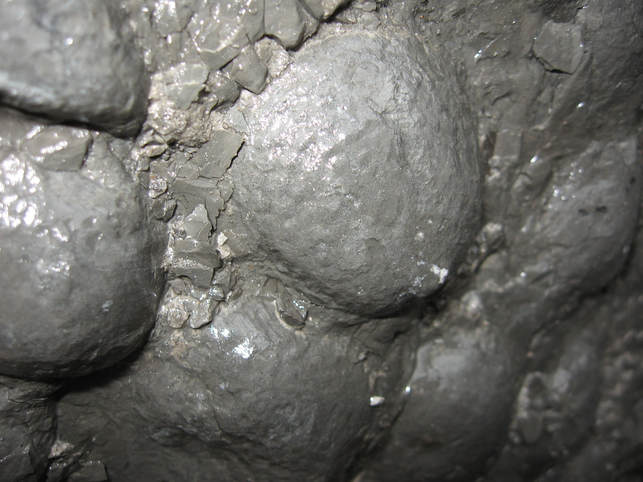 A close up. You can see the pattern.
​These Cyclocrinites were found in Middle Ordovician rocks considered by evolutionists to be 450 million years old. If you believe in evolution and millions of years you would have to conclude that bulbous algae exhibits stasis (no change) because they still exist today as their modern cousins the dasyclad algae. These marine (salt water) plants* live in waters up to 90 meters deep. All we see so far is algae turning into algae. Genesis calls this "Producing after their own kind". 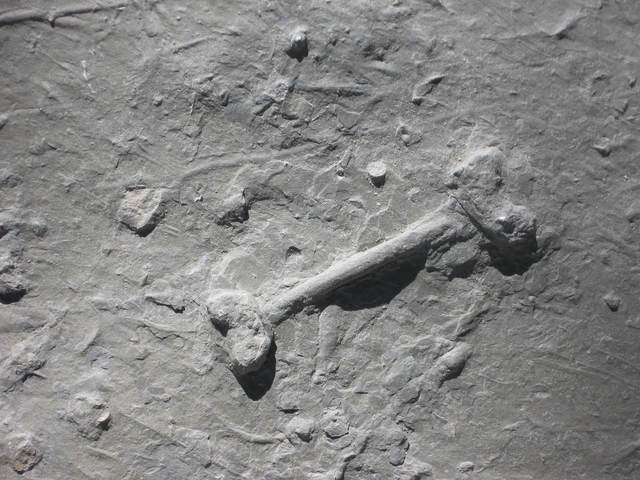 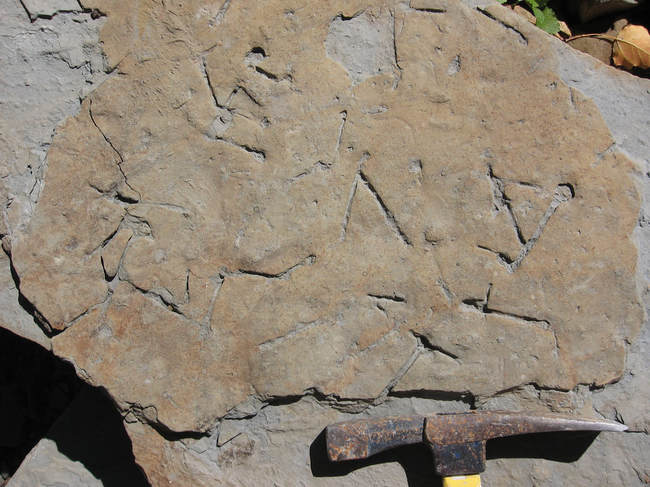 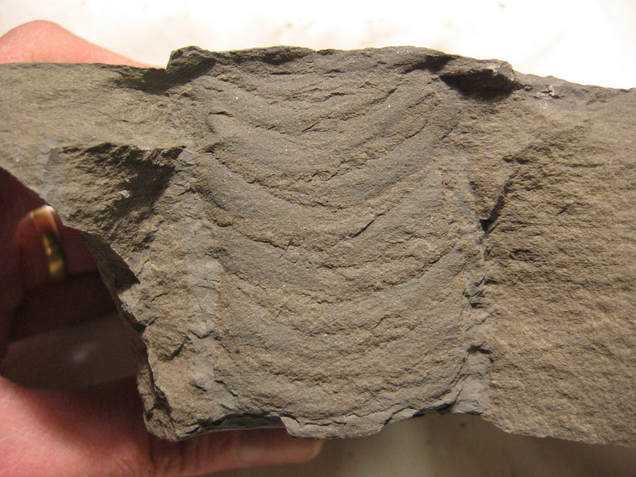 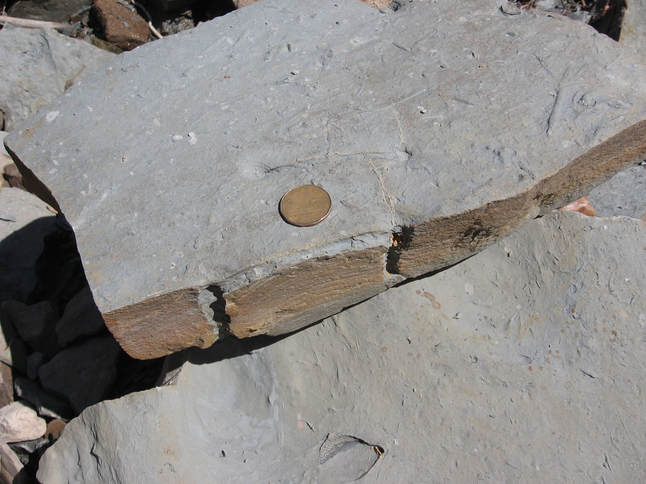 Top and side view. Note the other trace just behind the coin. Georgian Bay Formation, Meaford Ont.
The Hard Facts!
These curious markings are invertebrate burrows probably created by worms as they move back and forth in a U shape.
The presence of these vertical burrows tells us this sediment had quickly and deeply hardened before the burrow could be
destroyed by water currents.
Rusophycus
(Trilobite Trace Fossil)
Description: Shaped like a bilobed tree nut.
Locations: Rare in Ontario, common in the Georgian Bay Formation
Hotspots: Toronto East, in creek beds near the lake and Meaford Ont.
Evidence:  Quick hardening of sediments. ​ 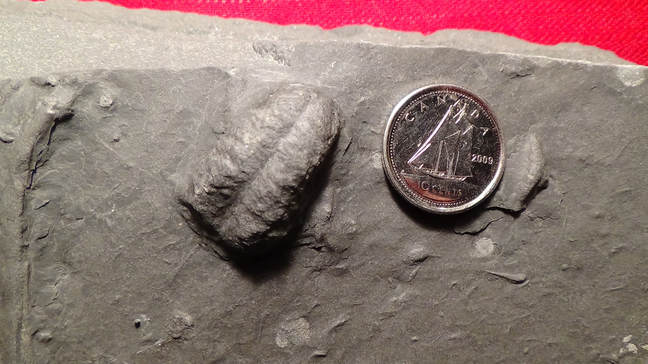 As well as worms apparently trilobites also burrowed as evidenced in these markings
that are common in the Georgian Bay Formation. It is thought that these are feeding burrows.
They are also called resting traces. A quick hardening of sediments could only preserve these.
(Rusophycus pudicus) Georgian Bay Formation,Toronto Ont.
Cruziana
(Trilobite Trace Fossil)
Description: Zigzagging bulb like objects.
Locations: Rare in Ontario found in only a few quarries.
Hotspots: None
Evidence:  Quick hardening of sediments. 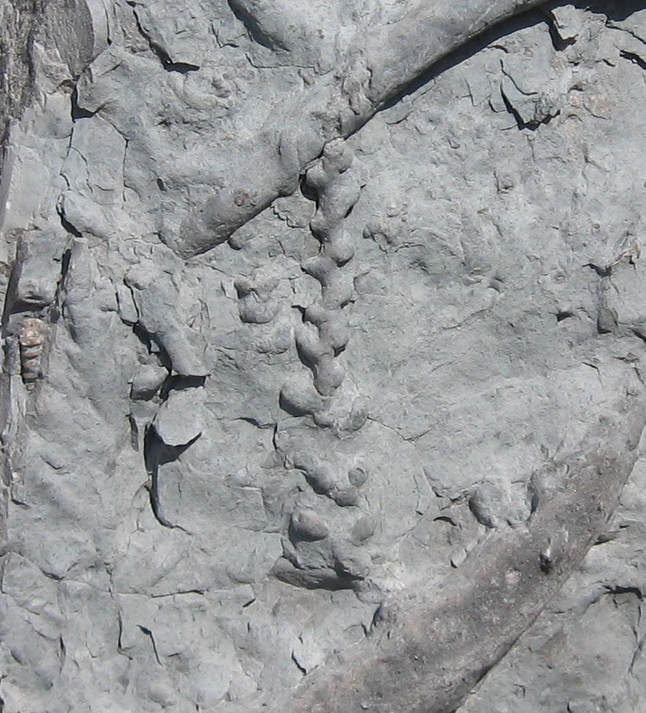 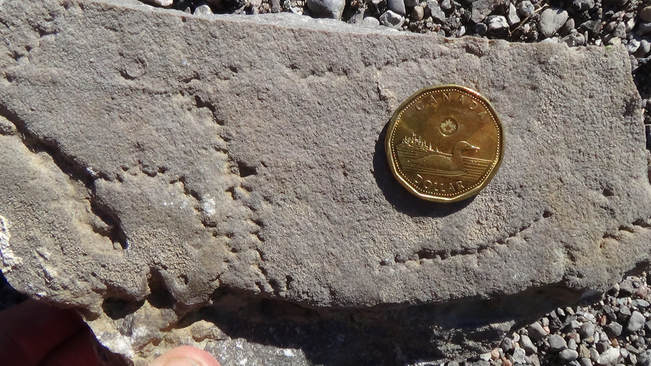 Multiple zigzag trackways made by an invertebrate animal with legs. To create prints like these indicates
a rapid hardening of the sediment and then a quick overlaying of new sediment to preserve them.
Verulam Formation, Powles Corners Ont.
Ostracod
(Sea Schrimp)
Description: Looks like small seeds.
Locations: Rare in Ontario found in only a few locations.
Hotspots: Gull River Formation
Evidence:  Living Fossil.

A slab with hundreds of ostracods on it. Note tip of rock hammer for scale.
​Gull River Formation, Norland Ont. 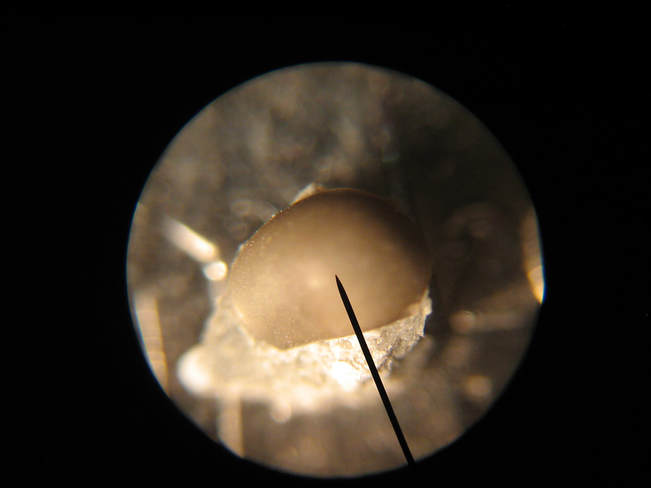 An ostracod under a microscope.
​Ostracized!
These are tiny marine creatures called ostracods also called seed shrimp (Eoleperditia fabulites). Ostracods are called
living fossils because they are still here. No matter how old evolutionists say these ostracods are, they have
produced after their own kind just as is stated in the book of Genesis.*There are over 40'000 species in the rocks
and only 4'000 species living today. That's not evolution, that's extinction.
(*Ref. SMITHSONIAN MAGAZINE JANUARY 2012 Some of the world's oldest organisms left behind fossilized
shells that, when translated to a large sculpture, bring an artistic edge to evolution By Karen Larkins)