2020 IN REVIEW
Jeremiah 32:17 NKJV
‘Ah, Lord God! Behold, You have made the heavens and the earth by Your great power and outstretched arm.
There is nothing too hard for You.
​It’s certainly has been a challenging year for ministries during the COVID pandemic and it’s no different for the Ontario museum. When Goodwood Baptist Church closed its physical doors in the spring, the museum housed in the church closed too. Sadly an April fossil trip, May museum open house and an April visit from Indiana Joe (Joseph Hubbard) all had to be cancelled. On top of that there were family health issues and a move. I'm sure many are glad 2020 is almost over.

​To keep folks encouraged, in April we launched a virtual museum tour where you can view the displays and for each show case we feature one fossil showing evidence for creation, catastrophe or intelligent design. Click the virtual museum tour link at the bottom of the report. 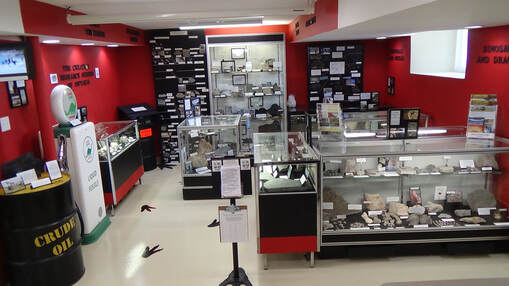 ​Front view of the museum.
APRIL
Despite the lockdown, research and fossil collecting carried on.
The public part of the April fossil trip to Norland Quarry was cancelled, but a few of us seasoned collectors went up anyways. Since the quarry owners had slated this day in for us, we didn't want it to go to waste. I was in search of fossil upgrades for the museum and wasn't disappointed. As always there was lots of evidence of a quick burial.

​The Lord provided just the fossils I was looking for. One of them was a rare Orthocone (Sactoceras manifoulinense Foerste) shell with colour banding. Orthocones are related to the coiled Nautilus that are still living today. Finding colour banding intact on a shell is great evidence for rapid burial.  This specimen will replace a much smaller one in a display.
Evolutionists argue that most shrinkage cracks were formed above ground (called desiccation cracks) and are solid evidence that there were periods of drying out times in-between the laying down of sediments, ruling out any argument that the entire stack of sedimentary rock was laid down all at once. Shrinkage cracks are not necessarily evidence of a drying out period as in modern mud cracks. Shrinkage cracks can form underwater by salt water flowing over mud or can form by compaction and dewatering of sediments. Therefore the sequence of rocks at the quarry could have been all laid down at once. All evidence for a large scale flood (Noah's Flood) only a few thousand years ago!
​​These fossils will be going to one of our mobile display cases that was set up in January at Pioneer Baptist Church in Norland. Pioneer has been supporting the ministry by allowing us to use their building during fossil trips in the area. Click on the link to see the setup, at the end of this report. 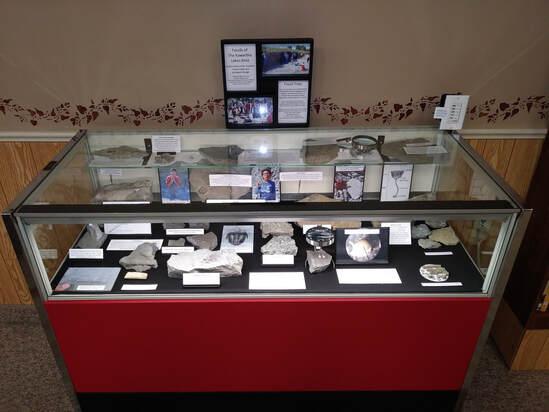 ​Showcase at Pioneer displaying local fossils
​Now back to the shop for a little preparation. Some of the fossils look fine as is in the matrix (surrounding rock) but others would display better if popped out of the matrix. In the garage I have just enough room for a little prep bench. I use an air scribe to remove the matrix (surrounding rock) from the fossil. It is basically a mini jack hammer. It not only chisels it away, but the vibration can also separate the fossil from the rock as a fossil surface is the rock’s weakest point. 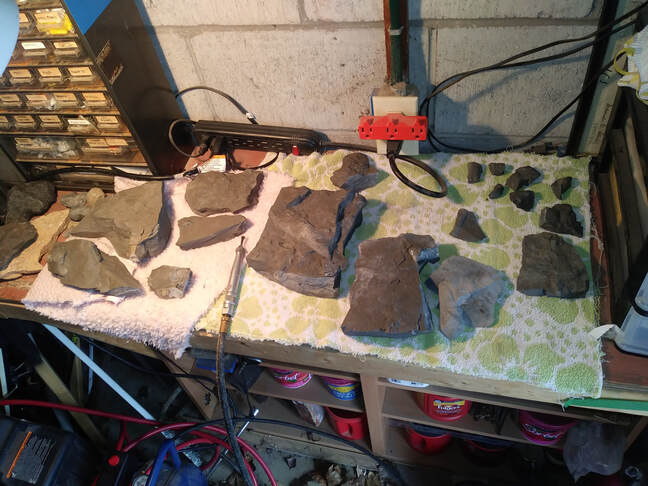 ​Fossils ready for preparation.
I wanted to use the air scribe on some of the clams to see if they were complete, intact, 2 sided shells. Why?
​The clams were closed and complete, indicating quick burial and quick hardening of the surrounding rock. When clams die they open up. These were buried alive. If they were slowly buried they would have been found opened up and scavenged. You too can come on one of our fossil trips and see the evidence for yourself. Contact Curator Martin Legemaate to get on the list for the next trip after we are free and clear from the threat of the COVID 19 Virus!
JULY
Creation Research Canada has moved! We are now back at: 12919 Warden Ave. Stouffville ON L4A-3X9
​This location has much more space again for fossil storage and for a fossil preparation lab.
NOVEMBER 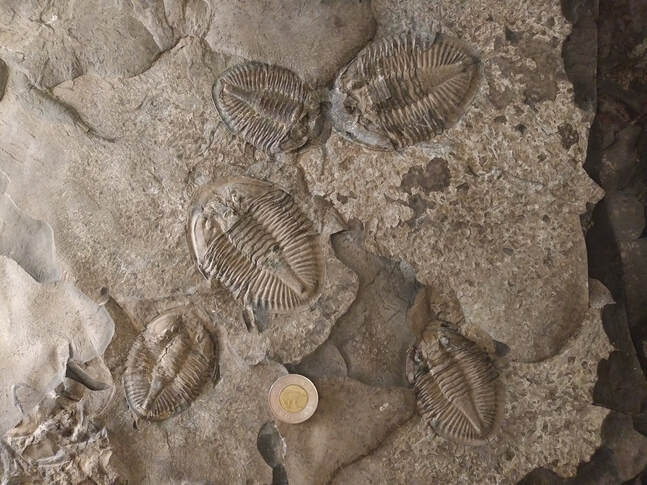 Pastor Rodger McCready from Bethel Baptist Church in Strathroy emailed me and said he wanted to donate a fossil to the museum. In November of 1996 while he was at Victory Baptist Church in Newmarket, he went on a field trip with John MacKay up to Craigleith to collect fossils. There he discovered a large shale slab with a cluster of 5 intact trilobites. It was displayed in his church office all these years, until he retired this year. 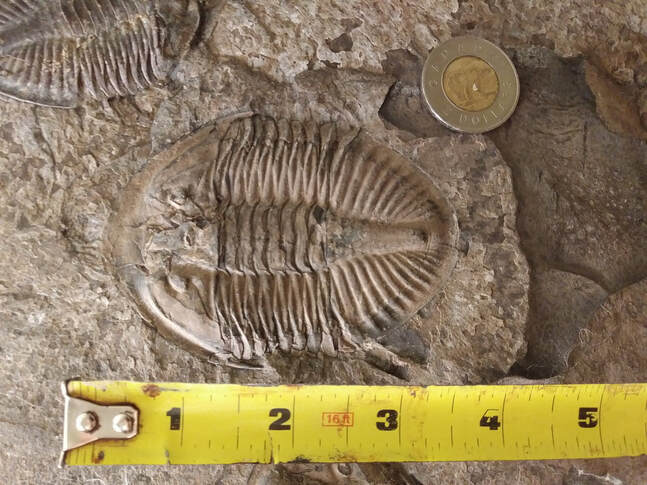 Close up of one of these huge trilobites (Pseudogygites latimarginatus), with the largest being almost 4 inches in length. Usually just one is found on a fossil trip and only about the size of a loonie. Thanks Pastor Rodger for the donation!
Virtual tour link: https://www.creationresearchontario.com/virtual-tour.html
​
Norland display setup link: https://www.creationresearchontario.com/mobile-displays.html