Photo: In the middle of a round about, Holder, Switzerland.
JOB 12
7 “But now ask the beasts, and they will teach you; And the birds of the air, and they will tell you;
8 Or speak to the earth, and it will teach you; And the fish of the sea will explain to you.
9 Who among all these does not know That the hand of the Lord has done this,
10 In whose hand is the life of every living thing, And the breath of all mankind?
After a few difficult years of Covid (and having 2 immediate family members receiving cancer treatment through it all), restrictions have lifted and we are getting inquires for tours and fossil trips again. Enjoy this year's adventures! Martin and Marc.
APRIL
SMALL TOUR
MAY
SWITZERLAND 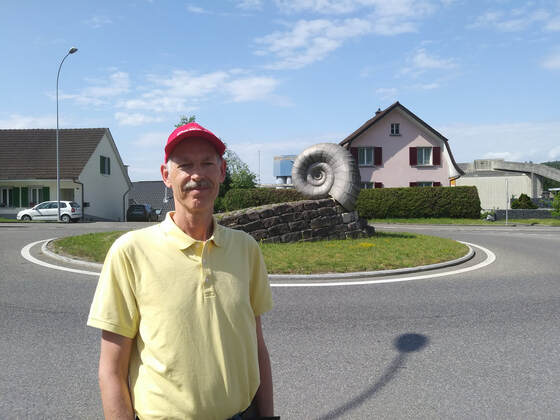 We had a great time in Switzerland this spring visiting relatives and I managed to take some time to do some fossil collecting. One area I wanted to go to for sure was in the Canton Aargau where the Jurassic rocks are exposed. The best place for that is always in a quarry so we headed over to the old Schümel Quarry, now a nature reserve in the town of Holder.
JULY
COLLECTORS FOSSIL TRIP
Every year I try to arrange a field trip just for seasoned fossil collectors where I myself can concentrate on searching for museum upgrades and collect new and different specimens. The guys are hoping again to catch that elusive complete Bathyurus trilobite specimen. 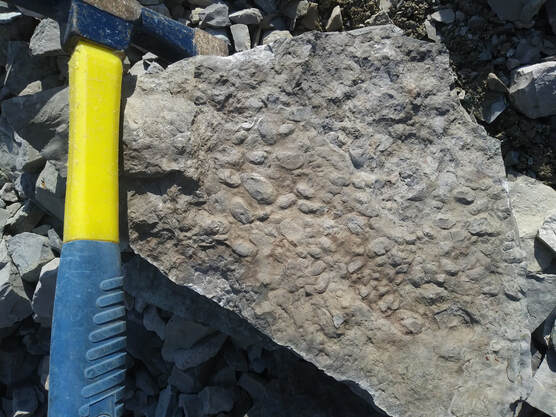 A nice Pelecypod (shell) mass mortality plate. A mortality plate is a whole group of organisms (usually the same kind) that have been washed into one area and then fossilized. Mortality plates are a common occurrence in the rocks of Ontario. The textbook type of slow random burial is just not found in the rocks.
By the end of the day some great museum upgrades were found and lots of fossil giveaways for museum functions.
JULY
GOODWOOD BAPTIST CHURCH VBS
Every year Goodwood Baptist Church (where the museum is housed) has a week of VBS and on the last day calls me in to run a fossil trip. Oil shale slabs loaded with trilobites are brought in from the Craigleith area for kids to crack open. 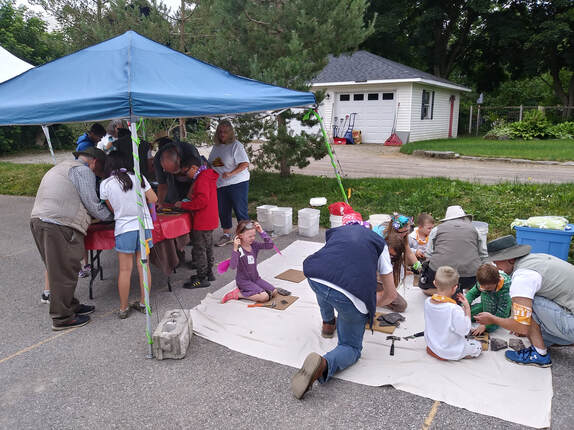 It was a really nice day for an outside fossil hunt. 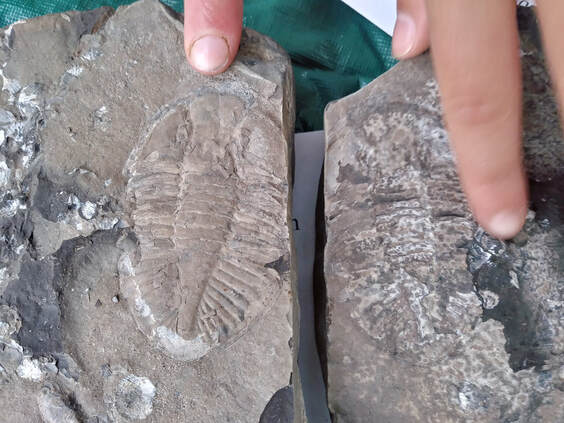 ...A complete trilobite fossil. Positive and negative impression!
​This also made it very simple for each girl to take home part of the specimen! 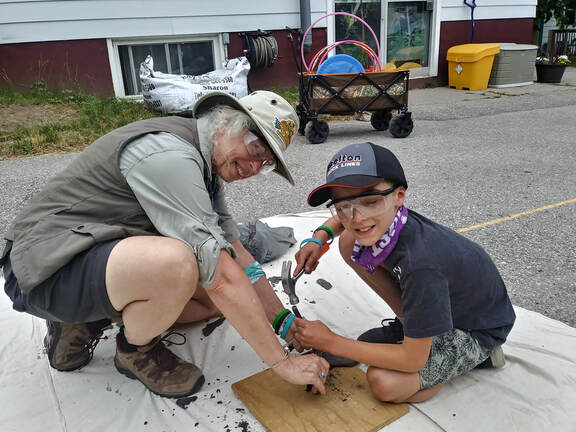 Conclusion: The kids learned today that these rocks were formed quickly due to the presence of oil. The only organisms found were extinct, as in the trilobites, or they were still here today, as in the shells found, called living fossils!
SEPTEMBER
NIAGARA REGION FIELD TRIP

Photo: Melissa walking up the steps from the Niagara Whirlpool.
After a few years of the Niagara Region field trip program collecting dust we were finally able to use it with a local homeschooling group. This program consists of 2 stops, The Niagara Glen and The Niagara Whirlpool, all part of the Niagara Gorge system. I had forgotten how difficult the trails were, or perhaps I am just getting older or, a combination of the two!
Conclusion:
All in all it was a great "although rigorous" trip. We found some great fossils and minerals and saw lots of evidence for a catastrophic past. Because of the pothole features, the Niagara Gorge is now thought to be much younger than previously estimated. How much younger? Click the link to 7 ONTARIO GEOLOGICAL WONDERS and scroll down to number 7, "The Niagara Gorge" ​to find out.
SEPTEMBER
KAWARTHA LAKES FOSSIL TRIP
Back to our Kawartha Lakes Quarry where because of our July trip, I knew the place would just be loaded with fossil specimens. This homeschooling group was not disappointed.
A 360 degree view of the quarry.
CONCLUSION
Everything found today lines up with what we read in the bible. 1) There appears to have been a flood, as in the flood of Noah's day. 2) Creatures really do produce after their own kind, as in the gastropods and shells found, called living fossils.  What's the flip side to living fossils? It's the fossils found that are extinct today, such as trilobites and orthocones. We are loosing species instead of gaining them which is the opposite of evolution. Creatures no matter where they are found in the geological column show signs of being intelligently designed! There is really no such thing as a simple creature!
NOVEMBER
JAMAICA MISSIONS TRIP
Every year Springvale Baptist Church hosts a trip to Teen Challenge, an addictions rehabilitation program in Jamaica. This year 20 guys came down to help with counseling and to help frame up a new multi-use facility. I was able to attend for the first time this year. 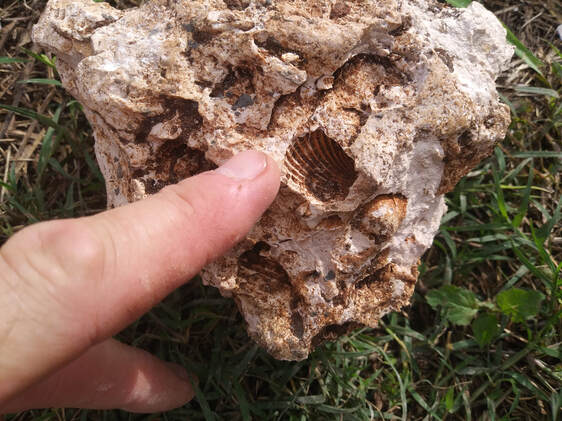 The rock in the area is Tertiary and there was plenty of white limestone on hand to check for fossils. This piece has fossil shells in it (a living fossil) and no matter how old evolutionists say these rocks are.... sea shells turned into sea shells!
DECEMBER
NEW MUSEUM ACQUISITION 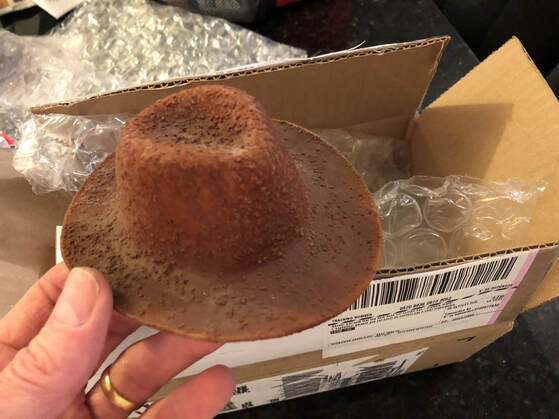 Some more artifacts purchased from Vance Nelson (Creation Truth Ministries). This one, a fossilized (permineralized) felt hat from the mineral springs of Karlovy Vary Czech Republic. After 14 days it's as hard as a rock. Things do not need millions of years to fossilize! Check out more of Vance's artifacts by following these links!
http://www.creationtruthministries.org/storenews.html    https://www.untoldsecretsofplanetearth.com/store/#/ 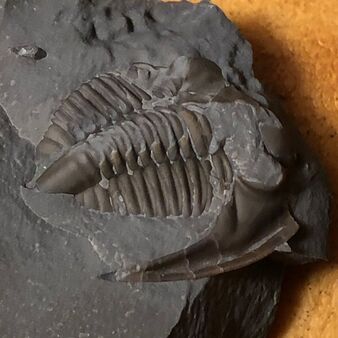 Some of the fossils from this year's collecting are saved for the preparation phase. Check out what's been prepped this year by clicking the button.
FOSSIL PREP
2023 TOURS AND FOSSIL TRIPS