MOBILE DISPLAYS IN PROGRESS
November 2019
Thanks to Central Baptist Academy in Brantford for hosting a mobile display case for 7 years! It's now off for a face lift in the new museum colours and then up to Pioneer Baptist Church in Norland. Much closer to our fossil sites. Pioneer has hosted fossil trips and events over the past few years.
December 2019 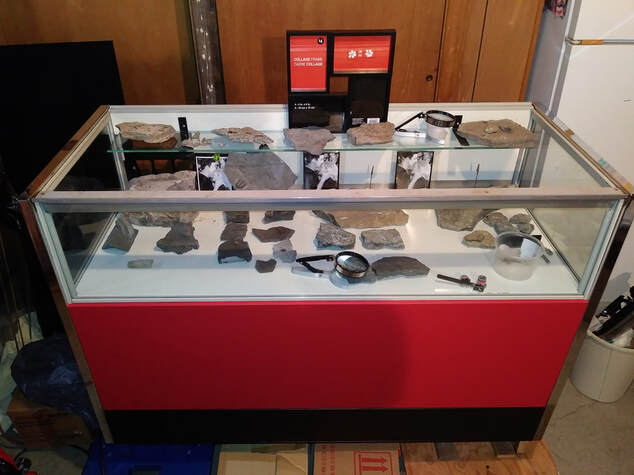 A bit more progress on the Norland display. We've got the new colours on and the fossils picked out.
​Now for the captions and photos!
January 2020
Older Posts
August 2014 CMI Displays
The 2 newest Ontario fossil show cases are being prepared for a display at the CMI (Creation Ministries International) Canadian office in Kitchener Ontario. The first one is a "Living Fossils and Extinction" display. Both are no help to the theory of evolution. The second, "Evidence of Quick Burial". Ontario has had a catastrophic past pointing to the flood of Noah's day. 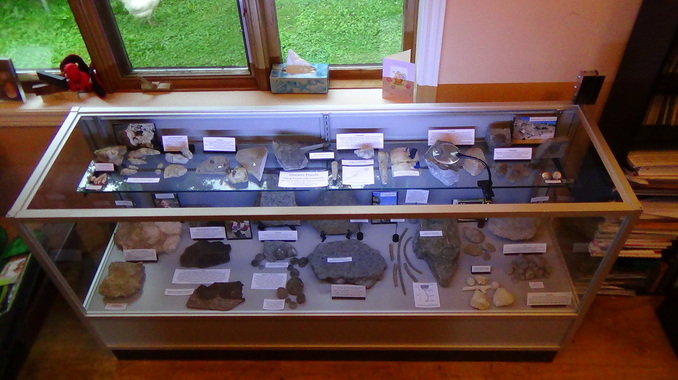 Living fossils and extinction display complete. The lighting system is a simple row of stick on LED lights with an external timing switch so browsers can switch it on for the duration that they are viewing. I added in the captions and finally a few photos. Darwinian evolution exists only in text books, not in the rocks!
Sept. 2014
Just got back from setting up the living fossils display at the CMI office in Kitchener. Looking good now but it took twice as long to set up as usual. Just as I was putting the last few fossils in one of the top glass shelves fell onto the fossils below. Don't know how that happened. No broken glass and only a few minor breaks on some fossils in which I quickly went into road side repair mode. Never used a glue stick to repair fossils before!! It could have been a lot worse. Expect the devil to throw a wrench in the works every once and a while to discourage. Thanks to Alexander who cheerfully helped me roll the display in. Check out the album to view the progress (and disaster). If you are in the neighborhood drop by and see the display and the evidence for creation and not evolution!
Oct. 2014
Nov. 1, 2014
SECOND DISPLAY SET UP AT CMI
Despite the snow on the ground for the first time this fall the second display case was transported and set up at CMI. The front entrance which will be further developed is an ideal place for the public to browse and catch the message of creation and catastrophe. Thanks to Richard Fangrad for help in moving them in place. No mishaps this time (whew) and the crinoid stems which were broken from last time were re-glued and put back in place.
Older Posts
​4 Display Cases Purchased in 2011 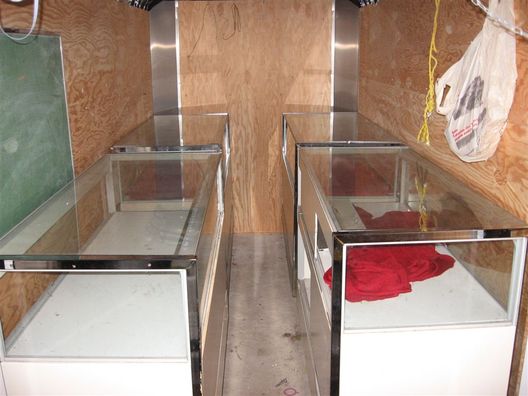 Arrival of 4 used display cases in the fall of 2011. These are perfect
as I always wanted showcases with storage in the back. 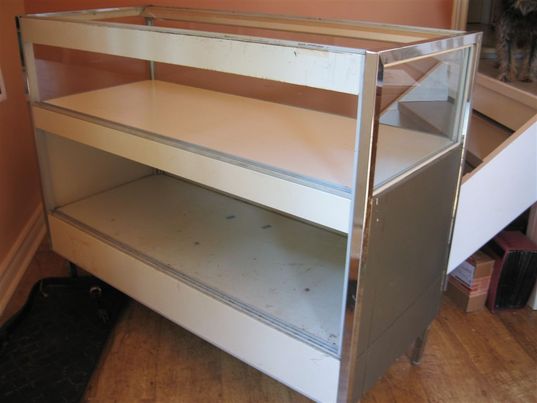 The first job is to do a good cleaning, to get the lighting in working order and to replace any scratched up glass. 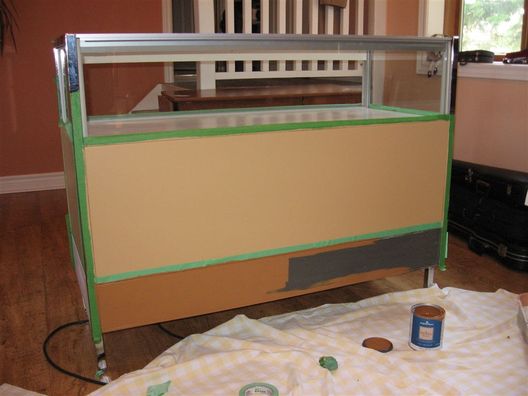 Now finding some coordinating colours then sanding, taping off and painting. 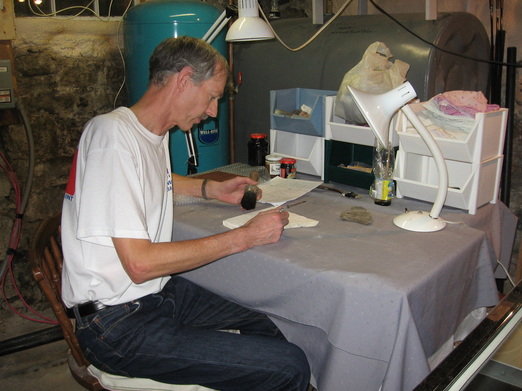 The difficult task of cleaning, sometimes repairing and varnishing the fossil to hold them together ... 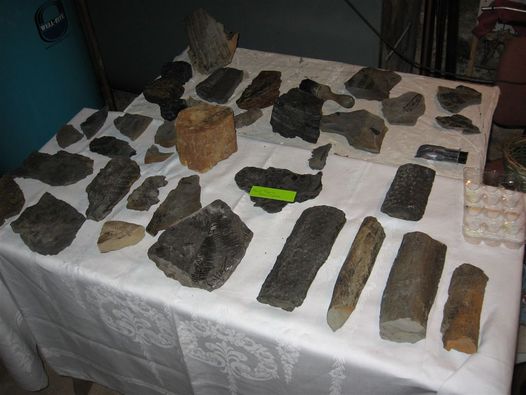 and finally choosing what fossils are to be displayed. 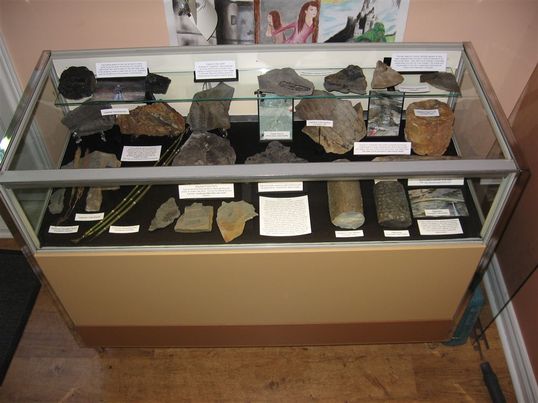 A trial set up to see if everything fits adding in the photos, information and captions. 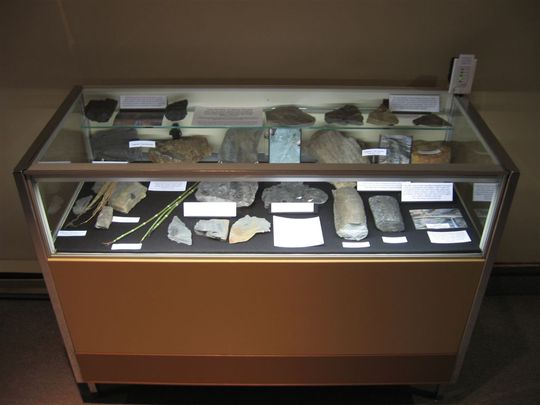 The finished showcase complete with a lighting timer switch. It almost has a glow to it! This one is set up at
Springvale Baptist Church, Stouffville Ontario, Spring 2012 and contains fossils from Nova Scotia.
UPDATE 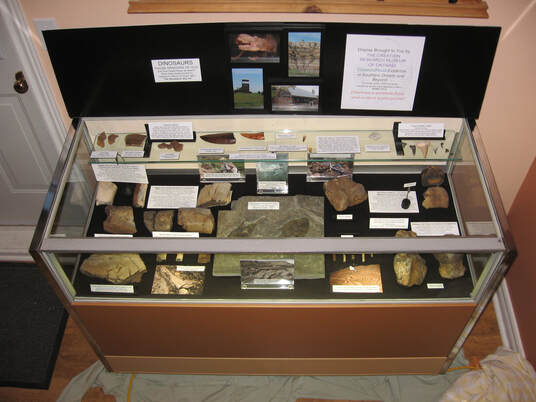 The second showcase was completed and went to Stouffville Christian School in June.
​The display consists primarily of dinosaur bones! 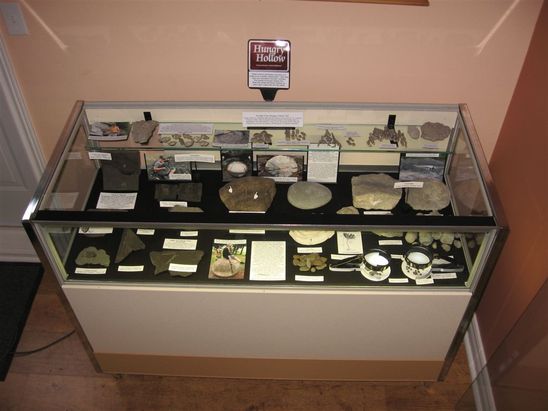 The third showcase is ready to go. This display consists of pyritized fossils of the Whitby Formation,
fossils of Hungry Hollow Ontario and Concretions. All great arguments for a fast, deep and recent burial. 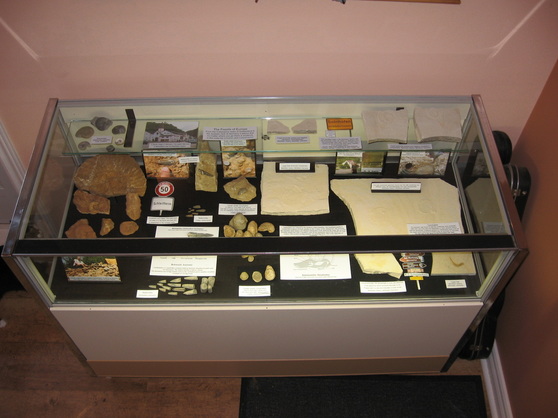 December 2012. Final showcase filled with fossils collected from the 2012 European trip.
The European fossils include fantastic ammonites from Solnhofen  Germany and Schaffhausen Switzerland.
Also Belemnites (a squid like creature with an internal shell and a cousin of the modern cuttle fish)  and fossil oysters.
Ammonites have become extinct which is no help to the theory of evolution.

August 2013
The Nova Scotia Fossil display moved to Central Baptist Academy in Brantford Ont.
See report in a recent newsletter: http://creationresearchontario.weebly.com/newsletter-fall-2013.html
Interested in having a display at your Church or School?
Contact Curator Martin Legemaate at:
creationresearchontario@hotmail.com
November 2013 update 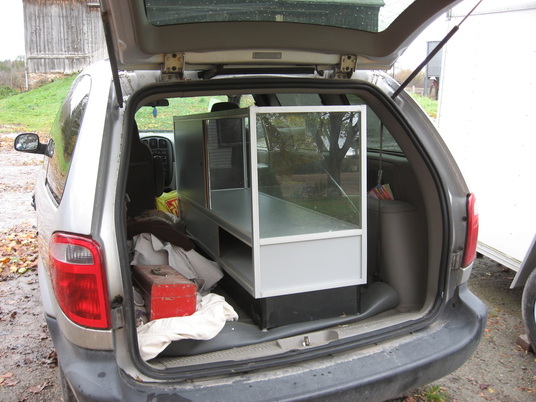 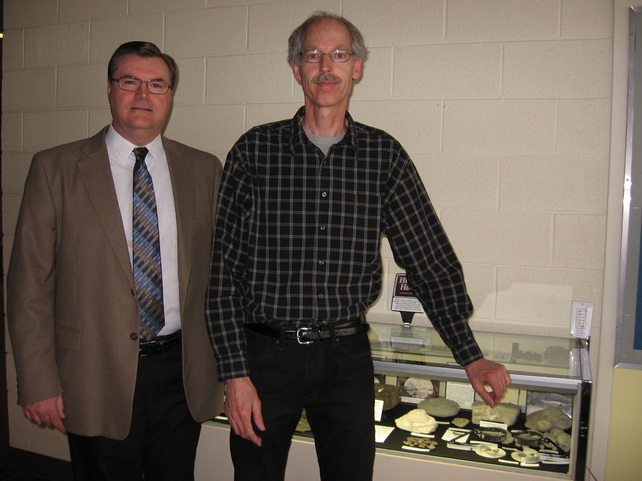 Pastor Michael MacDonald and Curator Martin Legemaate in front of the set up display
"Everyone loved the display - from old to young. I told them when I get a chance I will preach at least
one message based on the contents of that display. Thanks again for the loan".
Regards,
Pastor Michael C. MacDonald
Michael is assistant pastor at Bethel and apart from wearing many other hats he founded Baptist Creation Ministries. He was burdened by the direction of today’s cultural movement away from the Word of God and sought to develop an effective ministry
that would correct error and replace it with God’s wisdom. By 2008 it had become clear that his ministry would involve
promoting a biblical worldview through the teaching of young earth creationism to counteract and correct the damaging error
of evolutionism. Hence, Baptist Creation Ministries was started.
Pastor MacDonald offers seminars throughout the year on such topics as:
* What is biblical creationism?
* What is evolutionism?
* Evolutionary Oops!
* Why can't we make them see?
* The importance of a worldview
* Is space the final frontier?
* Could Noah's Flood be true?
And more

For a full bio and more information on Baptist Creation Ministries
click the link:http://www.baptistcreation.com/index.html